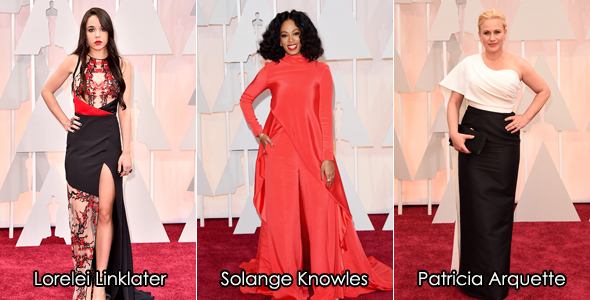 This was the biggest bounty of bad fashion and half-assessed, boring choices, evah, on an Oscars red carpet. Here are my Worst-Dressed Oscar picks. (1) Lorelei Linklater, the 20-year old actress from the film “Boyhood,” should fire her stylist for choosing the worst dress that designer Gabriela Cadena has ever created. Cherry blossom panels look like wallpaper from a Chinese restaurant, used maybe because she ran out of black fabric? The skirt is too tight, ill-fitting, the slit is too high and the makeup is too harsh and dark for her age. All of this is tragic because she’s so cute. Maybe she should hire a stylist? (2) Solange Knowles really stood out on the red carpet, but not in a good way. You couldn’t ignore the traffic-cone orange, pajama pant-tunic combo disaster by Christian Siriano. Did she get tangled up in a tarp when her house was being tented for termites but was in such a rush she just kept going? Muy sad, because I love Siriano. (3) Best Supporting Actress winner Patricia Arquette was dressed by her best childhood friend, designer, Rosetta Getty. With friends like these who needs enemies? Getty violated crucial laws of figure camouflage. A two-color dress visually cuts an already short figure into two shorter ‘pieces.’ A high, strapless neckline made from stiff, horizontally-gathered fabric makes a big bosom look bulkier. That wasn’t bad enough so Getty extended the fabric horizontally across one arm, making it look shorter. This entire look, including hair that looked like Arquette just got off a speed boat, was a screaming mess.

(4) I wasn’t even going to include Lady Gaga wearing Azzedine Alaïa, because she’s a performer and it’s just a costume. But I couldn’t resist. She did one better than Amal Clooney and her white gloves. Those were merely decorative, with these, Gaga can do some spot welding. Always entertaining. (5) Who would have thought that Nicole Kidman would have such a crashing fall from high atop the fashion pedestal on which she held court, for lo, so many years? I was shocked her gown was Louis Vuitton. The yellow/green iridescent gown looked like it was from the sales rack at a pageant dress boutique. This, my friends, is why you must not blindly wear any designer label just because it’s expensive. (6) Chloë Grace Moretz is young, adorable but inexperienced in navigating the carpet and it showed with this dress choice. Her enormous Miu Miu ball gown, had so much volume it almost swallowed her up. Crafted no doubt, from a floral comforter that Miuccia had lying around from a failed upholstery collection. The dull beige color was a fail as well. (7) Apparently, it’s not just Chanel that hates Keira Knightley. (Remember that last red carpet, ‘tablecloth’ dress?) Valentino also hates her, judging from the ‘shower curtain’ gown the Supporting Actress nominee wore on the Oscars red carpet. It was a terribly drab, nude color with embroidered words that looked like a ripoff of Angelina’s sad, scribbly wedding veil by Versace. At least Versace can’t be blamed because Brangelina insisted on her kids meddling into its design. What say you Valentino people? (8) Felicity Jones, Best Supporting actress nominee, wore an Alexander McQueen ball gown. I can see why she liked it with all its grandeur, but it was too voluminous, overly beaded, very bridal and too old for her. I can see her in a refined, sleek column gown. A modern day Audrey Hepburn. (9) Oh JLo, JLo. You have now reached the end of the multiple iterations of ‘bronze goddess’ you’re allowed. My first impression: ‘Oh no! Jennifer Lopez put on a white gown and walked into the spray tanning booth by mistake.’ The bronze Elie Saab gown would have been spectacular in any other color. Even her nails were “spray tan” tan. And the white push-up pads guarding against a ‘nip slip’ were clearly visible through the fabric. Terrible. (10) Kerry Washington who wore Miu Miu must be tired of award season. This was a bad, uninspired, dull prom dress. Mismatched knit skirt and too-small satin peplum top that didn’t fit her correctly, even if she’d worn a good strapless bra. (Fire that stylist too). (11) Gwyneth Paltrow in baby blanket pink Ralph & Russo should consciously uncouple from her stylist. The color was dreadful, the trite, monster rose was straight from the 80s. The bad part of the 80s. This dress, even with the rose still attached, could have been close to a ‘best-dressed’ for me in any other color. (Ok except nude or yellow) (12) Best Supporting actress nominee Laura Dern wore Alberta Ferretti. A spectacular fit, but the metal spikes all over were harsh and costume-y. She should also fire her hair stylist for that frightening Donald Trump-like, side-swoop-bang thing. Scary all over. (13) Naomi Watts in Armani Prive. Hmm. What’s with that tube top? Too revealing for the Oscars. Reminded me of way back when, some tacky girls wore tube tops under denim overalls. Eeeeek. (14) Jessica Chastain in Givenchy. Good attempt but it was a miss since the blue dress seemed to be eating her like a boa constrictor swallowing a small animal. Daisy Olivera